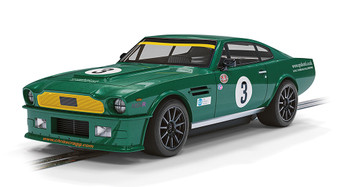 This particular Aston Martin has been a mainstay of the AMOC series over the past few decades. It combines the wonderful dark shade of Green so common with Aston Martin racing cars of old with the vibrant yellow that is so associated with them in the 21st Century. Highly modified from the road going car this V8 racer is a real brute, capable of high speeds as well as quick laps. The sidewinder chassis allows for great handling as well as a high detail full interior.

The Aston Martin V8 is not the most obvious racing car, but it is one that has seen some real success in the hands of British club racers. One such driver is Chris Scragg, who alongside his son Ant has raced this wonderful green Aston Martin V8 for a number of seasons, competing in the AMOC series as well as the Grand Touring Heritage challenge, this V8 is a definite contender on your classic GT grid!