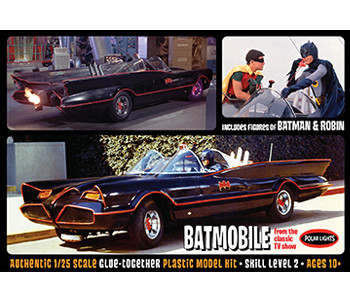 Batmobile with Batman and Robin Figures

The popularity of the classic Batman TV show has gained a resurgence with a flood of new product hitting the market for collectors to enjoy. This offering of the Batmobile features all of the parts and detail from Polar Lights' original 2011 release, but also includes BRAND NEW RESIN FIGURES OF BATMAN & ROBIN as they appeared in the show. The actor likenesses of Adam West and Burt Ward have been painstakingly created in 1:25 SCALE. The box for this release also features photos of the car and characters from the show. It is sure to appeal to modelers and collectors who fondly remember the classic show.